1066 After defeating Harold at the Battle of Hastings, William the Conqueror awards
the Manor of Chalton and the Parish of Idsworth to the Earls of Shrewsbury

During the 12-13th Century the church is re-built

1330 The Wall Paintings are added to the Chancel

1349 - 50 Many villagers are amongst the 1.5 million who die from the Pneumonic Plague. The village is wiped out in the course of successive plague epidemics

16th Century The extension to the Nave is built

Timeline involving the Lords of the Manor

From the creation of the Manor of Idsworth in 1102, the church would have served as an occasional family chapel which was open initially to the village and then, when the community was re-established further afield, to the wider agricultural parish. The early Lords of the Manor may have looked on the manor more as an investment and source of income rather than their main home.  Nevertheless, by the 18th century, the 300 foot well, ice room and nearby foundries  showed the house had developed as a family home and business centre over its long life.  The Lords of the Manor had responsibility for maintaining the church and its present layout and condition reflect their interest and its importance to the community.

c.9th Century  Church  (re-)built on an ancient site to serve a Saxon community.  Roman and Saxon remains reveal the area was cultivated in ancient times and already developed in Saxon and Viking times.

1066 The Conqueror awards the Manor of Chalton including the Parish of Idsworth to William Fitz-Osbern who later gives it to Roger de Montgomerie, Earl of Shrewsbury

1204. King John ordered the Sheriff of Hampshire to deliver up to Henry Hoese the land of Idsworth which had belonged to William de Ferrers, together with the stock of that land and seed to sow it. The corn, however, he was to retain to the king's use. Henry Hoese held the manor for about eighteen years.

1205. King Henry III grants the manor to Brito, a cross-bowman and personal guard.   Henry Hoese is ordered to surrender it to him. This he did not do immediately, whereupon the sheriff of Hampshire was ordered to force Henry to give up the manor to Brito with all the profits therefrom. Brito held it till 1226, when the king ordered the sheriff to cause Reynold de Bernevall to have full possession of the land of Idsworth, saving, however, to Brito all his chattels found in that land. Brito died less than a year afterwards, and the sheriff was commanded to give up to his widow Edelina all the corn, which he had caused to be sown in Idsworth, in order to support her and her sons.

1227. The manor is granted to the king's messenger William Blome, who holds it for nearly thirty years.

c.1260. On the death of William Blome's widow Alda, the king grants  the reversion of the manor, valued at £16 a year, to his yeoman Herman de Budbergh as a reward for his services.  In the grant it is specially stipulated that Herman and his heirs should not alienate the land to any but the king without his special consent.

c.1270.  de Budbergh grants  the manor to Queen Eleanor, who, in her turn, with the consent of her husband, grants it " in free alms to Tarrant Nunnery (co. Dors.)", a house to which she was so great a benefactress that it was sometimes styled in records 'Locus benedictus reginae' or 'Locus reginae super Tarent.'  Her gift is confirmed by Henry III in 1271, and re-conformed by Edward I in 1280.

1281.  Iseult, the Abbess of Tarrant, grants the Manor of Idsworth to Henry de Bonynges and Isabel his wife for the rent of a penny. This was to be paid at Christmas. From this time, the abbess and her successors were overlords of the Manor of Idsworth. The connection continued when the abbey was sold by Thomas Cromwell; as late as 1606, the manor was said to be held of Sir John Portman "as of the site of his abbey of Tarrant".

1316. John Romyn takes over the manor from de Bonynges.

1330. Wall-paintings are added to the Chancel walls.

1348-50. The first widely recorded outbreak of Plague (The Black Death) decimates Europe. Villagers amongst 1.5 million dead in England .  Idsworth village probably dies in the course of this and successive epidemics.

1419. Thomas de Wintershull , a distant kinsman and heir of the Romyn family, takes on Idsworth in addition to his manor at Wintershull  in Bramley (Surrey) however, he dies without  issue in October the following year leaving the manor to two sisters and co-heirs: Joan, the wife of William Catton, and Agnes, the wife of William Basset, who hold the manor for a decade.

1520. The church is ordered to keep a record of births, marriages and deaths. This is slow to take effect and the details of remote parishes are not generally available before 1550.  The family history associated with Idsworth Church is under investigation

1600s The Nave is widened and two new windows added to the new South wall. The interior is remodelled.

1651. Cromwell expels clergy across the country.  Parliament awards him the Manor of Chalton.

1789.  Jervoise ClarkeJervoise who already owns the Chalton estate, buys the manor and the Clarke Jervoise family retain it until the Great War.

1830s. More repairs are carried out to the church.

1840s. A direct railway to Portsmouth is routed through the Idsworth valley and is the reason the manor house is demolished and rebuilt (1852) further from the line and closer to Horndean.

1864. The 14thC. Wall-paintings are re-discovered during repairs and the church is re-dedicated to St Hubert. It is probable the external walls were left untouched under the influence of the Ecclesiologists’ War on Stucco.

1970s. Repairs are carried out after a fire in the Vestry. It is likely the repairs are extended to include a cement-render on the Chancel exterior walls. The North Nave wall on the point of collapse is also repaired and continues to receive frequent piecemeal attention. The West wall is believed to have been under-pinned about this time.

1975.  The roof is re-tiled and the fleche roof and side-panelling replaced.

2013.  The South and West walls are repaired and rendered.  Temporary repairs are carried out to the East Window.

Family history will be available shortly. 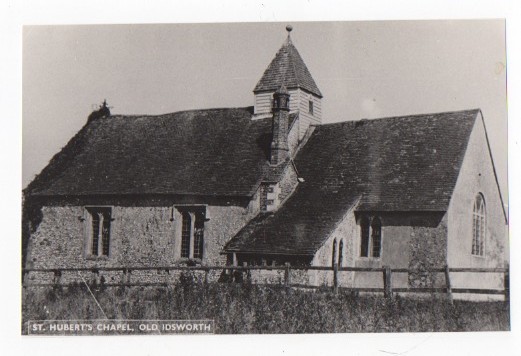